A Brief History of Japanese Whisky

Japan is relatively ‘new’ to Whisky Production compared with the traditional whisky-producing countries of Scotland, Ireland, and the USA; however, by ‘new’, we mean over 95 years since the first single malt distillery was founded at Yamazaki near Osaka in 1923.

The founder of the Yamazaki Distillery (Shinjiro Torri) sent an employee to Scotland after the end of the First World War with a mission to learn and gain as much information as possible regarding the production practices and the overall history of Scottish whisky. After a few years and numerous tours of distilleries, the employee returned to Japan and put his newfound knowledge and experiences into practice. Yamazaki was born!

It wasn’t until the late 1970s and early 1980s that the Japanese whisky industry took off. Sales of imported whisky were increasing two-fold. New distilleries were built, and some Sake distilleries (Japanese Rice Wine) were converted to whisky production, seeing this as a new way of making alternative and additional income.

However, nearing the end of the 1980s, the whisky industry in Japan was struggling, and several distilleries were unfortunately forced to close their doors because of a slump in sales due to the ever-increasing availability of cheaper imported whiskies from rivalling countries, such as Scotland, Ireland and the USA. Additionally, an unwanted rise in Japanese alcohol taxes didn’t offer any help, and this, therefore, made Japanese whisky increasingly more expensive than their overseas competitors.

Fast forward to today, and the demand for Japanese whisky has never been higher. As a result, the opportunity for growth in this market is sky-high. Why is that, I hear you ask? It’s mainly thanks to increased exports to most areas across the globe and the winning of major World Whisky Awards. This, in turn, means that the reputation of Japanese whisky has grown tremendously, and an increased amount of people are now drinking and, more importantly, collecting it than ever before.

There are currently just eight active distilleries in Japan, the majority of which produce both single malt and blended whiskies.

Each distillery has its own style and method for distilling and maturing whisky; however, most follow the tried and tested traditions of the Scottish distillers.

Four of the eight Japanese distillers can be found in the centre of the mainland (not too far from Tokyo), with two further to the South-West (including the most-famous ‘Yamazaki’), one to the far North of the mainland, and one all on its own situated in the Northern island of Hokkaido. 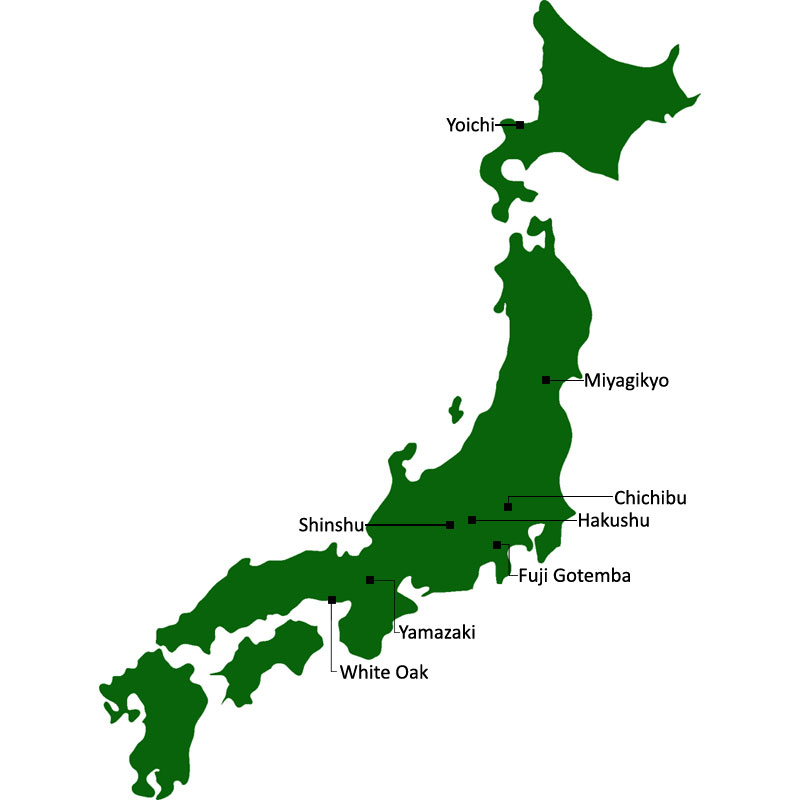 Japan’s oldest distillery and still, by far, the top-selling and most recognisable single malt whisky produced in the country. A rare bottle of 50-year-old Japanese Yamazaki whiskey was recently sold (August 2018) for £275,000 at an auction in Hong Kong, becoming the single most expensive bottle of Japanese whisky ever.

How to pronounce Yamazaki: yama-zakee

Location: Between Osaka/Kyoto on the main island of Honshū

At the foot of Mt. Kaikomagatake in the Southern Alps, Hakushu is Suntory’s second malt distillery; they produce different whiskies to those found at Yamazaki.

How to pronounce Hakushu: ha-koo-shoo

Location: in Yamanashi Prefecture on the main island of Honshū

Interesting fact: The Hakushu Distillery takes its water from the Ojira River, which is considered to be one of the top 100 exceptional water resources of Japan.

Nikka’s first distillery, based on the northern island of Hokkaido, produces malts that are rich and heavy.

How to pronounce Yoichi: yo-ee-chee

Location: On the northern island of Hokkaidō.

Interesting fact: The Yoichi Whisky Distillery is located west of Sapporo (the capital of Hokkaido, Japan’s northernmost island), surrounded by mountains on three sides with the coast on the other.

How to pronounce Miyagikyo: mee-yag-ee-kyo

Location: In the north of the main island, near the city of Sendai

Interesting fact: The location for the distillery was chosen because of its clean air and level of humidity. The current capacity is over 2 million litres per year!

Whisky from this distiller is sold under two names, Fuji-Gotemba & Fuji Sanroku (which means ‘at the feet of Fuji’ in Japanese).

Location: at the foot of Mount Fuji in Shizuoka

Interesting fact: Gotemba was selected as the site for the distillery because it was felt to have a climate most similar to Scotland.

How to pronounce Chichibu: chit-chiboo

Location: Near Chichibu in Saitama Prefecture.

Interesting fact: This is the newest distillery in Japan.

Shinshu Distillery is one of the highest altitude whisky distilleries currently in production in the World, by far the highest in Japan.

How to pronounce Shinshu: shin-shu

Location: in Nagano Prefecture on the main island of Honshū

Interesting fact: After opening, the distillery was only in production during the winter months, up until 1992. It halted its Whisky production in 1992 until 2012.

The distillery was actually founded by Eigashima Shuzo in 1888, but its purpose was to produce sake and shochu. It overlooks the picturesque Seto Inland Sea, the only distillery in Japan situated by the coast.

Location: in Hyogo on the main island of Honshū

Interesting fact: The location has very intense climatic conditions, causing them to lose generous amounts every year during maturation.

If you wish to find out more about the fascinating culture of Japanese Whisky, try our friends at Whiskyforeveryone, Master of Malt, The Whisky Exchange and Whisky Shop.

One thought on “A Brief History of Japanese Whisky”