Wine made in Rioja is a firm favourite with us in the UK. It’s in the North-Central region of Spain, famous for producing high-quality red wines, predominately from the Tempranillo grape variety. The UK is high on the list of exports from the Rioja region; it’s thought we import approx. 33% of all Rioja exports, over 48 million bottles of Rioja per year. It is equivalent to 36 million litres, twice as much as second-ranked Germany, so it shows us Brits love a Spanish Red!

About the Rioja Wine Region

The Rioja region is split into three sections, Rioja Alta to the west, Rioja Alavesa to the North West and Rioja Baja to the east. The famous Ebro River passes through or beside all three territories. Rioja Alta and Rioja Alavesa both have a cooler climate than Rioja Baja because of an elevation difference of 300m; Rioja Baja is known for producing fruitier wines than the other two.

Wine from Rioja is different from other parts of the World. Each wine is controlled by the ‘Consejo Regulador DOCa Rioja’, who inspect each wineries quality and ensure that consistency is maintained to a high standard. Rioja is categorised into the following four types:

A first or second-year wine that keeps its primary freshness and fruitiness.

One year minimum is required in casks and a few months (2/3) in the bottle. It’s slightly different for White Rioja; it’s a minimum of 6 months in the cask.

These must be aged for three years minimum with at least one year in casks. These wines have excellent potential and are selected for the best vintages. Again it’s different for white wines; the minimum ageing period is two years and at least six months in casks.

These are selected wines from exceptional vintages that have spent at least two years in oak casks and bottled for three years. The minimum ageing period for white wines is four years, with at least one year in casks.

Each of the different types of Rioja has coloured labels on the bottles to easily distinguish the difference, Green = Rioja, Red = Crianza, Burgundy = Reserva and Blue = Gran Reserva.

A traditional glass designed explicitly for wines from Rioja features a medium-sized stem and a large bowl that narrows at the opening; it has a tulip feel about it. The wide bowl allows the wine to breathe, and the narrow opening traps the all-important aromas, keeping the nose of the wine alive when you come to taste and sip the wine. Rioja wine specific glassware isn’t as standard as you might think; the popularity of the wine seems to suggest it should be, but for some reason, manufacturers are generally covering Bordeaux and Burgundy. This is because these two types of wines are popular throughout the World and Rioja is a step behind. 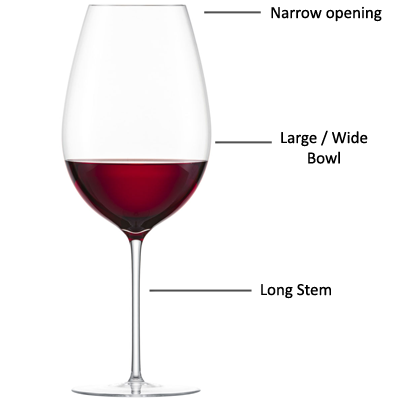 If you’re looking to learn more about Rioja and Spanish Wine, the ever-popular Wine Map of Iberia will help! Covering both Spain and Portugal, the beautifully produced and easy to understand map has been extensively researched and shows all of the wine-producing areas of both countries. 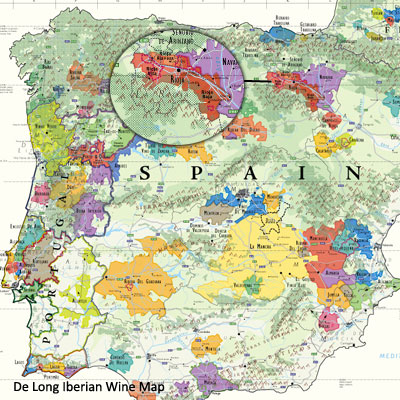 If you love the wine from the Rioja region, check out our selection of glassware for Rioja wines and see how a specific glass behaves compared with a general all-round red wine glass.

For more information, check out the official Rioja UK website.