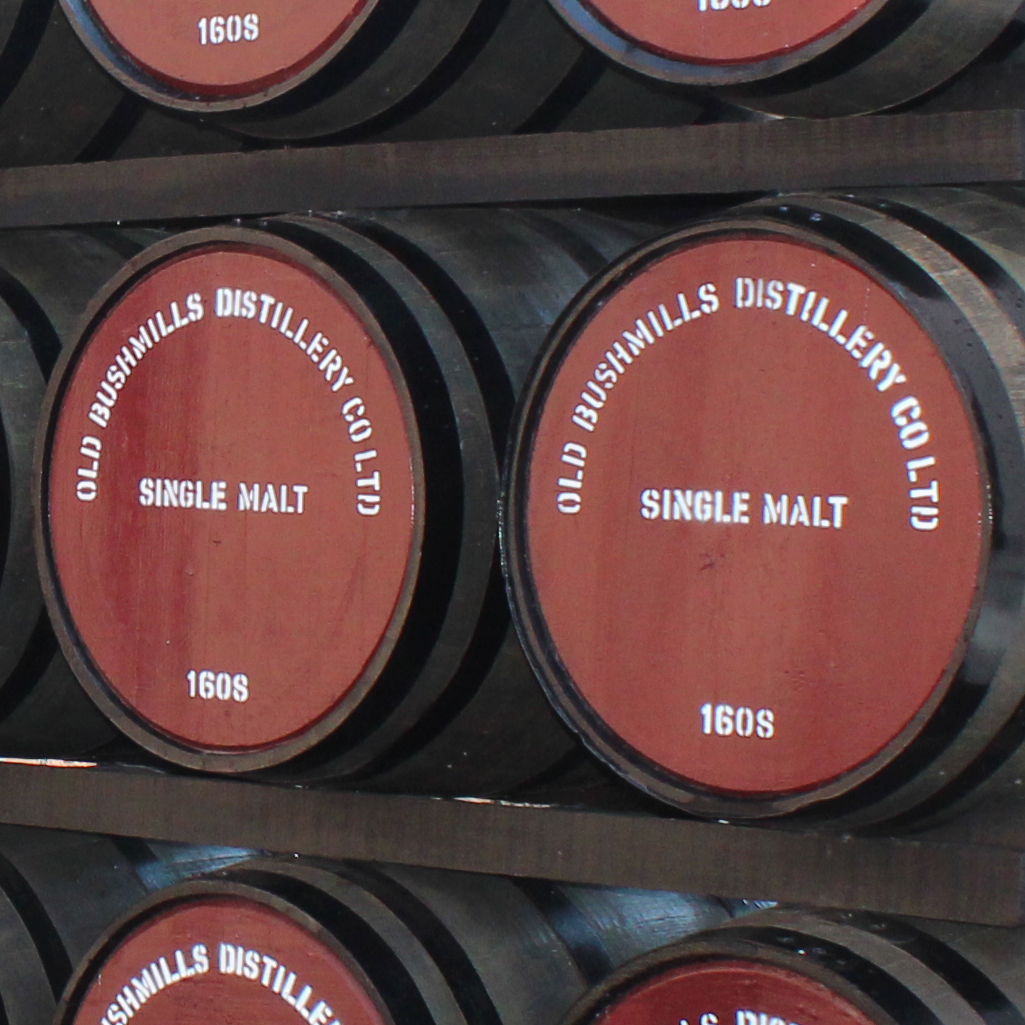 Ireland is famous for many things, especially the drinks that they produce. We’re not talking about the black stuff; however, we’re talking about their ability to create some of the best and well-known Whiskies in the World. Rivalling Scotland, the United States of America and Japan, Ireland has a long-standing history with Whiskey, which dates back to as far as the 1600s.

The original Bushmills brand was founded in 1608 when they were granted the first license to distil whiskey. A few bumps in the road since then, including the Irish War of Independence (1919 > 1921) and prohibition in the United States (1920 > 1933), greatly impacted the Irish whiskey industry, but Irish Whisky is well and truly back on the World stage.

In today’s market, Irish Whiskey has never been so popular with distilleries located all over the Emerald Isle, from Dingle Distillery in County Kerry in the South West all the way up to the World-Famous Bushmills in the north of Northern Ireland. Export numbers are at their highest ever, shipping far and wide.

There are currently 31 distilleries in Ireland, with plenty more planned for the future, from large scale projects to craft distilleries. Each distillery varies in bottle capacity and what’s produced, whether it be Whiskey, Gin, Vodka, and the like. 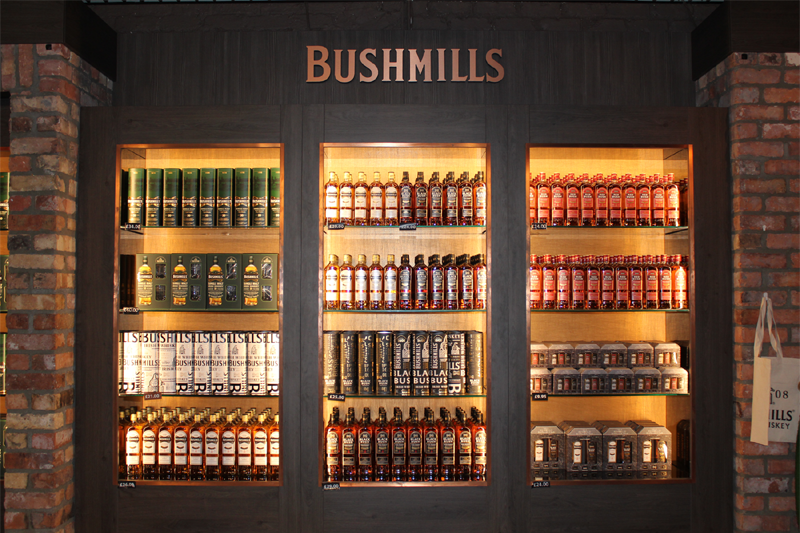 There are currently 31 operating distilleries in Ireland (as of December 2019), creating Whiskey and Gin and Vodka. 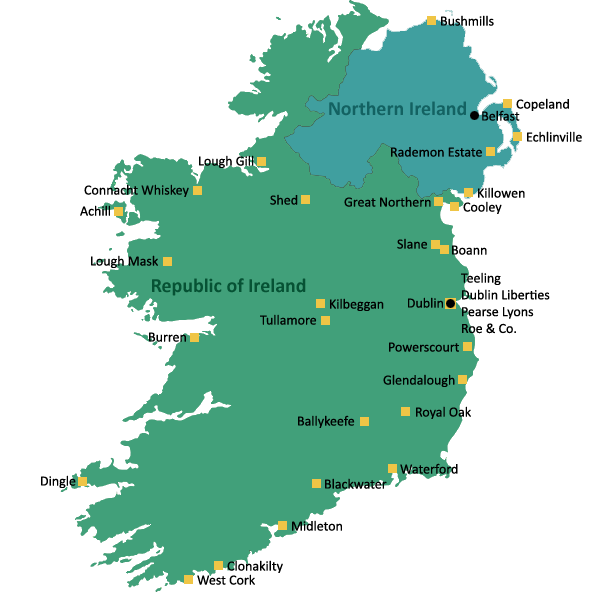 What are the most famous Irish Whiskey Brands? 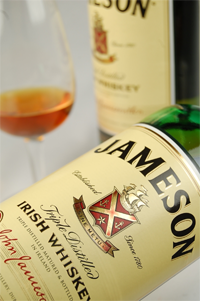 Jameson is probably the most famous, stand out whiskey brands available on the market; most bars around the world will undoubtedly have a bottle of Jameson’s available. Originally from Dublin, Jameson is now distilled at the New Midleton Distillery in County Cork, thanks to merging with Cork Distillers to form the Irish Distillers Group.

Over 31 million Jameson whiskey bottles are sold every year; it accounts for more than 70% of all Irish whiskey sold in the USA. It’s far to say that Jameson is one of the best-selling Whiskey labels.

Reportedly the second-most best-selling Irish whiskey brand on the market, with an estimated 11.5 million bottles sold per year. It has a history dating back to 1829, when the distillery was established in Tullamore, a town in central Ireland. The D.E.W. in the brand name is named after Daniel E. Williams, the general manager and later owned the original Tullamore Distillery. 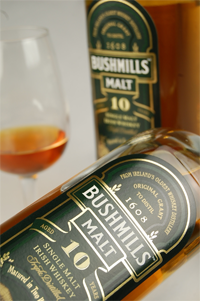 Bushmills claims to be the oldest licensed distillery globally, dating back to 1608 when it was first licensed to distil. However, Bushmills was officially given the Irish whiskey brand a registered trademark in 1784. Located in the North of Northern Ireland on the North Atlantic Coast, the distillery is a popular tourist attraction with approximately 120,000 visitors per annum.

Located in County Westmeath on the River Brosna, Kilbeggan Distillery is the oldest licensed distillery in Ireland, dating back to 1757. They use the oldest working pot still producing whiskey in the world today; a copper pot still that was constructed in the early 1800s has been refurbished and put back to use. 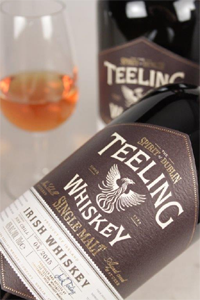 Teeling Whiskey is one of the newest distilleries in Ireland; it is the first new distillery in Dublin for over 125 years. They’ve racked up an impressive array of category-leading worldwide awards in their short existence, including the World's Best Single Malt award at the 2019 World Whiskies Awards.

Distilled at the same Midleton distillery in Cork as Jamesons, Redbreast is matured in first-fill Sherry and bourbon casks, and it’s the biggest selling single pot still Irish whiskey in the World. Recent accolades for the Redbreast 21-Year-Old include being named the Second Finest Whiskey in the World in Jim Murray's dependable 2018 Whisky Bible.

Green Spot is a single pot still Irish whiskey, produced for Mitchell & Son of Dublin again, at the Midleton Distillery in Cork. Production is limited to 12,000 bottles per year, so it’s relatively hard to get hold of. However, the distribution of Green Spot has become more widespread recently. The name originates from the original colour coding scheme for the casks; Green Spot used paint to track and highlight the age of the whiskey inside the barrel! 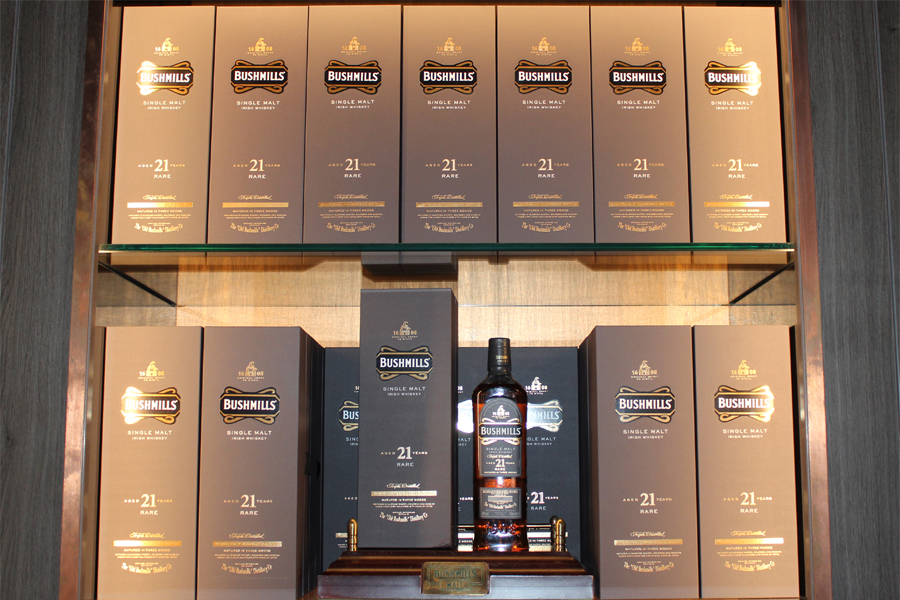 Where can I buy Irish Whiskey?

Irish Whiskey is available in supermarkets, off-licences and specialist online retailors, however for a more in-depth choice of some fantastic Irish whiskies, check out our friends at Hennings Wine Merchants, The Whisky Exchange and Masters of Malt.

Where can I buy perfect Whiskey glasses?

Click here to view our vast selection of whisky glasses which are perfect for Irish Whiskey. We also have a great collection of whisky decanters that are ideal for whisky and other spirits such as cognac, brandy, port and more!